American gun culture is largely unique, but advocates on both sides have often pointed to the gun-control success stories (we looked at Japanese and British gun laws) as well as the countries with relatively wide gun ownership, such as Israel. But what about Switzerland?

Switzerland has the world’s third-highest number of privately held guns per person, after the United States and Yemen, an outgrowth of its unique military culture. Service is mandatory for young men, though the national military is a little bit like a collection of local militias. That militia-tinged military culture blurs the line, just a bit, between an “on duty” time, when it’s normal to carry a gun, and “off-duty”; the result is that it’s not considered crazy, as it might be in the United States, for a service member to carry his or her assault rifle home. 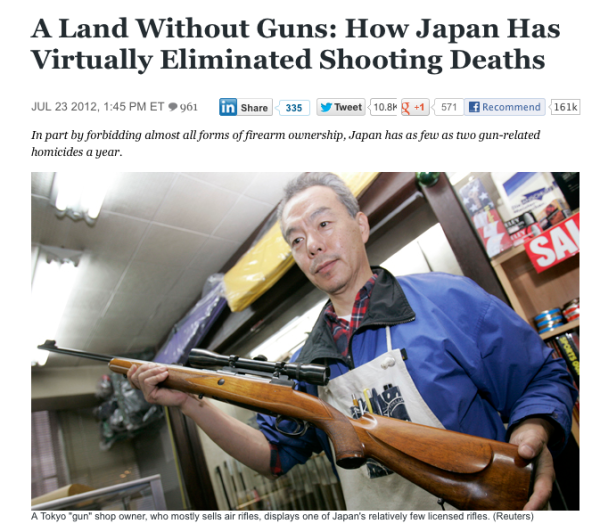 The Atlantic explores how Japan rid itself of guns:

To get a gun in Japan, first, you have to attend an all-day class and pass a written test, which are held only once per month. You also must take and pass a shooting range class. Then, head over to a hospital for a mental test and drug test (Japan is unusual in that potential gun owners must affirmatively prove their mental fitness), which you’ll file with the police. Finally, pass a rigorous background check for any criminal record or association with criminal or extremist groups, and you will be the proud new owner of your shotgun or air rifle. Just don’t forget to provide police with documentation on the specific location of the gun in your home, as well as the ammo, both of which must be locked and stored separately. And remember to have the police inspect the gun once per year and to re-take the class and exam every three years.

Even the most basic framework of Japan’s approach to gun ownership is almost the polar opposite of America’s. U.S. gun law begins with the second amendment’s affirmation of the “right of the people to keep and bear arms” and narrows it down from there. Japanese law, however, starts with the 1958 act stating that “No person shall possess a firearm or firearms or a sword or swords,” later adding a few exceptions. In other words, American law is designed to enshrine access to guns, while Japan starts with the premise of forbidding it. The history of that is complicated, but it’s worth noting that U.S. gun law has its roots in resistance to British gun restrictions, whereas some academic literature links the Japanese law to the national campaign to forcibly disarm the samurai, which may partially explain why the 1958 mentions firearms and swords side-by-side.