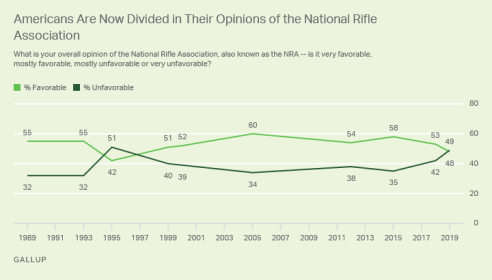 Americans’ image of the National Rifle Association, or NRA, has grown more negative in the past year with the percentage viewing it favorably dropping below 50% for only the second time in 30 years. Roughly equal percentages of U.S. adults now say they have an unfavorable (49%) opinion of the NRA as say they have a favorable one (48%). For most of Gallup’s 1989-2019 trend, including in 2018, opinions of the NRA were more positive than negative.

The latest update is based on an August 15-30 Gallup poll, conducted after mass shootings in El Paso, Texas, and Dayton, Ohio earlier the same month. In addition to the fallout from the mass shootings, the NRA has also been in the news for internal power struggles that led two top officials to resign as well as reports of financial trouble for the organization. Also, last week, the city of San Francisco passed a resolution naming the NRA a “domestic terrorist organization.”

Only once in Gallup’s trend have opinions of the NRA been worse than now. In 1995, 51% had a negative opinion and 42% had a positive opinion of the group.

The 1995 survey was conducted shortly after the organization sent out a widely criticized fundraising letter. The letter, citing the 1994 assault weapons ban, referred to federal agents as “jack-booted thugs” who were trying to take guns away from citizens. The reference prompted former President George H.W. Bush to discontinue his membership in the NRA in protest.

In Gallup’s 11 readings on the NRA, an average of 53% have rated it favorably and 39% unfavorably.

The percentage of gun owners expressing positive opinions of the NRA declined slightly, from 75% to 68%, with little change among non-owners (39% to 37%).