“Nearly a third of the 155,000 guns officials recovered in 2012 were traced back to sources outside the state they were found in, according to data compiled by the Bureau of Alcohol, Tobacco and Firearms. The map below shows firearms traces in each state that year. Notes: If the ATF could not determine where a gun was first sold, the agency declared its source to be the state in which it was recovered. ProPublica excluded data on 999 firearms either recovered in or traced back to U.S. territories, as well as two guns which were traced back to Canada.” 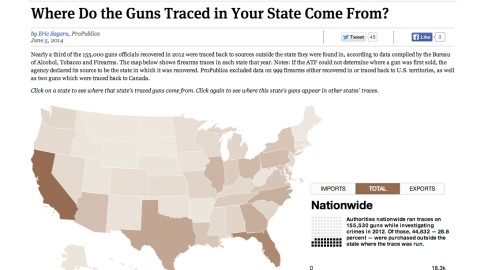